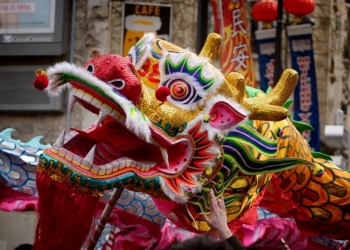 In China and around the world, families travel to reunite with their loved ones in order to celebrate this major event. .

Traditionally, elders receive and prepare New Year's meal. Greetings, wishes, poems written on red paper, as well as auspicious characters such as happiness or spring, are displayed here and there, especially on either side of the front door.

The New Year comes with many festivities and celebrations which last about a fortnight, beginning with a family meal and culminating with the Lantern Festival - a full moon day.

It is vital for the whole family to reunite so as to get rid of bad influences and start the New Year with signs of good omen. It is therefore customary to leave empty seats around the table for family members who could not travel.

Meals are rich, delectable, meticulously prepared and most often, symbolic. Fish, the symbol of wealth is an indispensable delicacy. Served with the head and tail, it is a symbol of abundance for the year to come, from the beginning (the head) to the end (the tail). Also, the most common formula for wishes is 年年有鱼nian nian you yu, which literally means “may every year end with ample surplus!”

For children, it is jubilation! Dressed in new clothes, they receive red envelopes, gifts, and the older ones shoot bengal lights and happily set off firecrackers!

Do you know your Zodiac sign as well as its symbol, virtues and shortcomings?

The Chinese calendar was introduced by Emperor Wudi of the Han Dynasty in 406 BC.
Each year is associated with one of the twelve zodiac signs: rat, ox, tiger, rabbit, dragon, snake, horse, goat, monkey, rooster, dog, pig, as well as one of these five elements: metal, water, wood, fire, earth.

The rat is passionate, affectionate, sociable and romantic, and derives strength from its imagination and determination.

It relies more on perseverance than natural strength to achieve its goals. It is honest and can't stand compromises..

It loves freedom more than anything, never gives up and often tries to exceed its limits.

The rabbit is cautious, cheerful and quiet, easily seduces its entourage thanks to its good mood and refinement.

It does not commit itself lightly and likes to plan everything with the greatest care.

Intelligent, charismatic and self-confident, the dragon has several strings to its bow.

It needs to face spectacular challenges, in line with its radiant personality.

Rather solitary, the snake likes to think and can spend a lot of time on aesthetic or philosophical questions.

Very organised, it can be very fast and very precise. In short, it is very effective.

It can be stubborn, obstinate, sometimes selfish but also full of love and compassion..

Charming, endearing, creative, intuitive, the goat can be fickle and sometimes pessimistic.

It does not enjoy loneliness and always wants to be in direct contact with loved ones.

Spiritual, cunning and imaginative, the monkey is an excellent communicator who cares about the future, and loves to exchange ideas.

Energetic, hardworking and enterprising, the rooster is a leader at heart, capable of galvanizing and energizing a team.

Altruistic, reliable and loyal, the dog is careful and kind. One can always count on it.

Sometimes stubborn, it can be pessimistic and lacks self-esteem and self-confidence...

It is non-violent, flees conflicts and seeks consensus.