craze which has never been denied from antiquity to present day 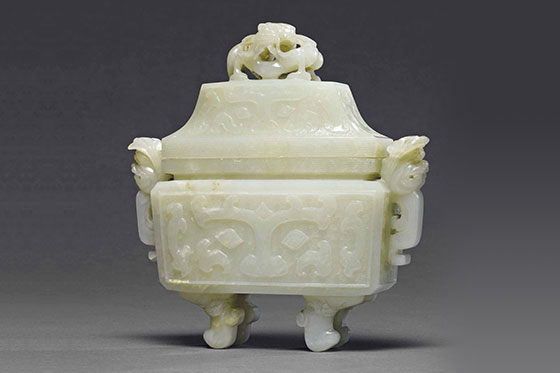 Jade and its representations in antiquity

Jade, is both, a visual and tactile pleasure. When you hold it in your hand, it feels soft, smooth and solid. It goes back a long way, through millennia. The qualities of jade are associated with a whole symbolism. Its beauty, virtues and supernatural efficiency soon saw the stone take on a more ceremonial role, especially in burials.

Under the Han, jade was replaced by bronze, but it remained popular among upper classes. Jade cicadas were placed on the tongue as a symbol of eternity and resurrection in the afterlife, and seals for the nine orifices of the body of the deceased wealthy families were made from this stone. 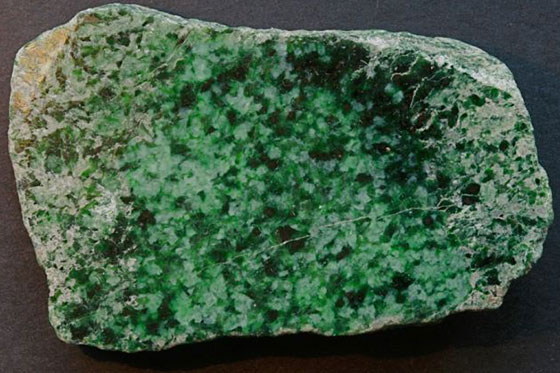 The Composition of Jade

In fact, the cultural term “jade” refers to two different and similar types of ornamental rocks, nephrite jade and jadeite, which were differentiated towards the end of the 18th century. Nephrite jade was the very first jade discovered in Asian history more than 7000 years ago, was soon replaced by jadeite.

Nephrite is a silicate of calcium and magnesium, a kind of amphibole mineral. It has a hardness of 5.5 or 6. This is hard, but not as hard as quartz. Therefore the ancient Chinese craftsmen could use quartz sand (regular sand) or pieces of quartz to carve jade.

Jadeite is a rock belonging to pyroxene minerals, made of silicate of sodium and aluminium. It has a hardness of about 6.5 or 7, about the same as that of quartz. 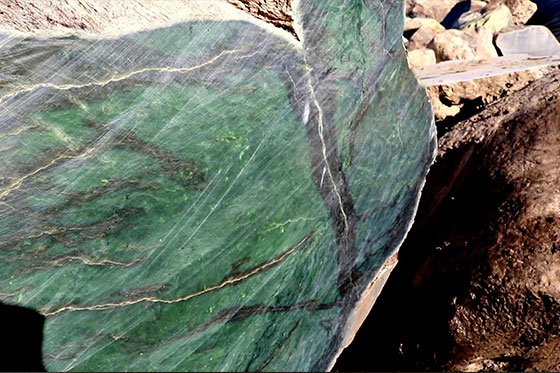 As early as the Neolithic Period, but surely, during the Shang Dynasty, nephrite was brought from the Khotan regions in western Central Asia or from southern Siberia. Contrary to popular belief, this hard stone was jade, which was the only stone used in China until the 18th century.

In recent history, and as early as the eighteenth century, jade was excavated from the K'ouen-Louen Mountains or picked up in riverbeds of western Central Asia.

Around the middle of the century, China imported in large quantities from Burma a brilliant green jadeite that was not quite so tough as nephrite. Its homogeneous blocks were perfect for sculpturing vases.

Nowadays the majority of the world's jadeite comes from Burma.

Techniques used until the 18th century

In ancient times, jade could not be cut by a metal knife, and so it was shaped and polished using wood or leather with sand acting as an abrasive. As a result, most ornaments often retained the shape of thin slabs of jade, which had been sawn from the main block.

To cut and shape a stone as intractable as nephrite, using such rudimentary tools, meant the sculptors were not free in pursuing their style. Nevertheless, quality pieces were admirable. Jade is a hard stone and working it lead to a schematization, resulting in a rendering, stripped of the superfluous.

As early as from the fourth century BC, more elaborated forms could be carved and bronze models could be imitated by using rotational tools or cutting discs. 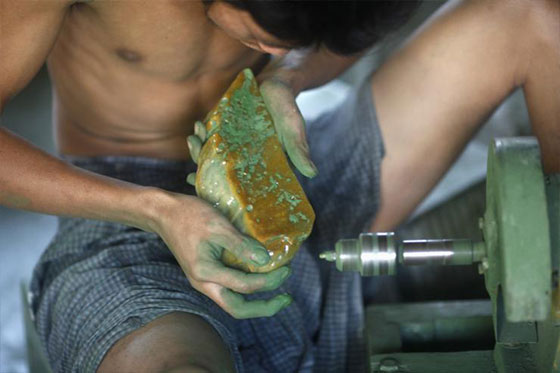 The pieces found in the tombs of the Shang-period were mostly white or light yellow, rarely gray-green.

The jade stone used since ancient times in China is in its pure state white but may be green, orange, black or purple. Good quality jade coming from Burma, radiates a blue-green tone and has an exceptional translucency. It can also be mottled black. 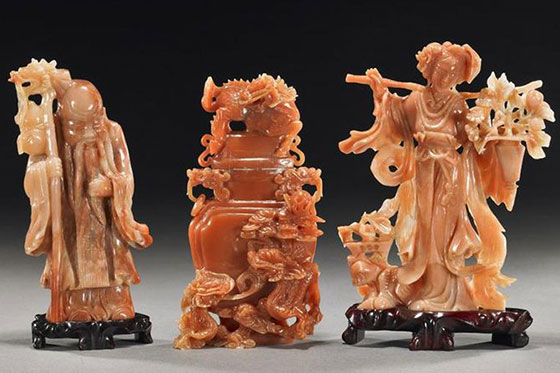 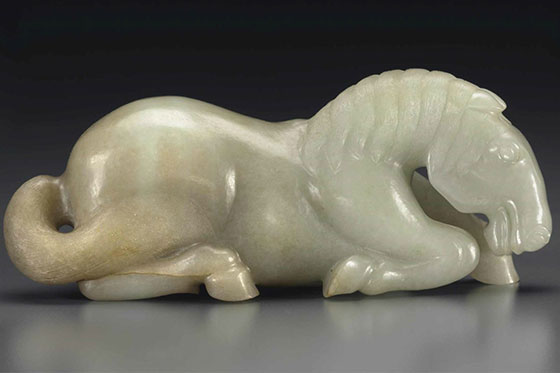 Many functional or symbolic objects

In the Neolithic period, weapons - axes, knives – and everyday objects - bowls, buttons, ornaments - were manufactured out of jade. Symbolic or animal shapes were popular and were represented as flat plaques showing fishes and birds.

Under the Shang there were only a few rare pieces of animals - tigers, deers, birds - carved in the round, which gave them an increased realism. At this time, jade appeared most often in the shape of long, smooth Neolithic blades for ritual purposes, sometimes as pendants, shaped like a semicircle.

was certainly one of the first ritual objects. It is a Chinese jade carved in the form of a flat disk with a circular hole in the centre. The earliest examples, which were unornamented, date from the Neolithic Period.

Later examples, from the Shang or Han dynasties, had increasingly elaborate surface embellishment, and the central hole had a diameter substantially equal to the width of the ring. The surface was decorated with relief sculptures, whose motifs represented celestial deities. Later traditions associated the “bi” with heaven, suggesting that the disk's circular shape also bore symbolic significance as related to the astronomical or esoteric knowledge. 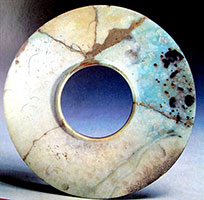 was used as a ritual utensil and was found in many tombs. In form, a cong is a tube with a circular inner section and squarish outer section. The “cong” is generally associated with the earth, although this is only a guess. 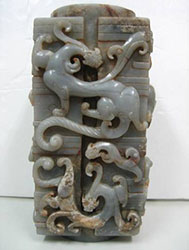 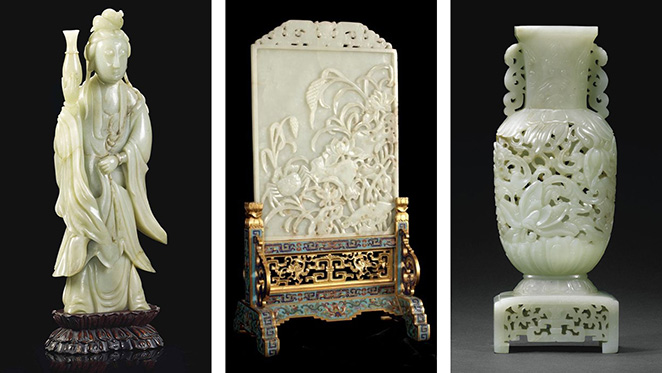 From the 18th century to the present day: virtuosity and mastery

In the eighteenth century, virtuosity, engravings and the mastery of shapes reached perfection. With appropriated tools, craftsmen could refine vases until the walls became translucent.

With designs of unsurpassed excellence and beauty - such as floral decorations blooming beyond the object, animals full of life, dressed in flowers, belt buckles, dragons biting their tails, ornamental plaques, one-colour or canelés bowls, - the traditional jade carving, could not have been better made. 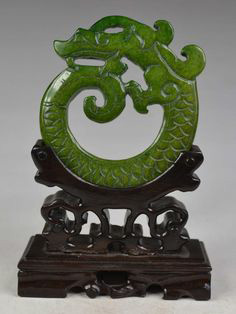 Jade may be chemically treated, injected with polymers to enhance translucency, but it does remain natural and real jade.

It is worth noting whether the jade has been dyed. This is subject to degradation over time due to reaction with strong light or household detergent.

Finally, some stones, such as serpentine, are natural stones that may look like jade, but have neither the properties nor the hardness. If they are carved and marketed under their real name, they can not be considered as a counterfeit. It is only when such jades are sold as “jade” of the price of jade that fraud occurs.