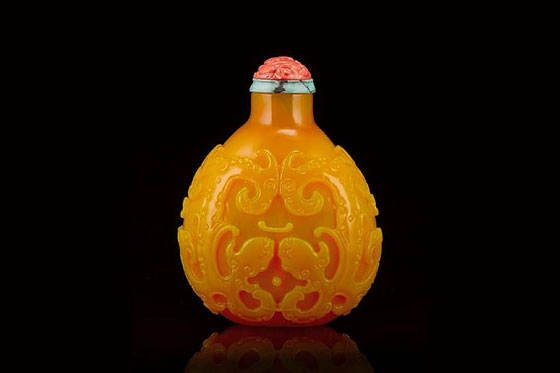 The virtues of tobacco…

By most terms of history in China, snuff bottles are a relatively recent development. Snuff Tobacco reached China towards the end of the 16th century - similar in time to its’ introduction into England. It was probably introduced by different ethnic groups, such as Russians, Manchu or Portuguese. Around 1680, it became a fashion phenomenon at court and in the upper classes.

Snuff bottles contained powdered tobacco. Its use started increasing, as the Chinese considered snuff to be a remedy for common illnesses such as headaches, asthma and digestion disorders. Chinese people were adding mint, camphor and jasmine to snuff. Smoking tobacco was illegal during these times, but the use of snuff was allowed.

The Chinese snuff bottles replaced the snuff boxes used by Europeans. When snuff was introduced to China, a need suddenly arose for portable containers to keep the powdered tobacco dry—and a new art form, the snuff bottles, was born. They became masterpieces, under the reign of Emperor Qianlong (1736-1796) in particular.

As early as 1700, snuff bottles became fashionable and passionate objects among all social classes. This accessory felt extra tactile and was often suspended as are the Japanese netsukes. It soon became part of the clothing of any elegant man.

These palm-size vessels were of exceptional diversity and refinement; they also varied in terms of shapes and materials. The jade-stopper usually had a very small spoon attached for extracting the snuff. The traditional shape for snuff bottles were that they were small enough to fit in the palm of the hand. 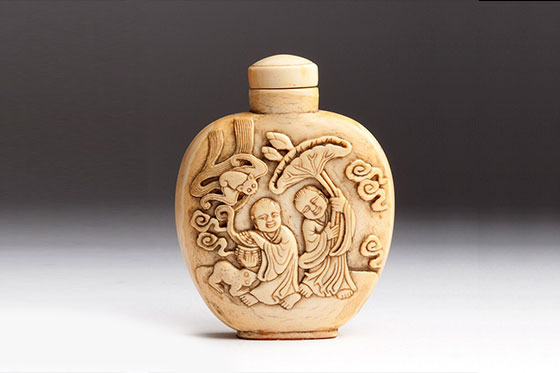 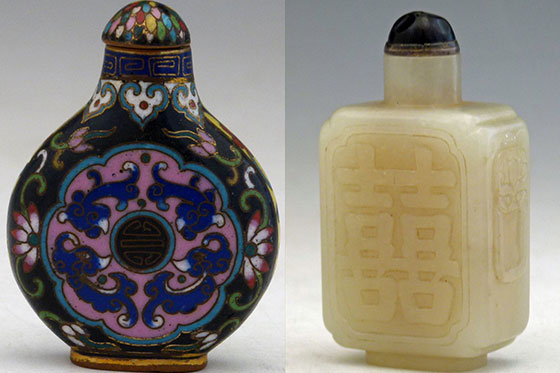 Snuff bottles were made out of many different materials including glass, ivory, coral, gold and mother of pearl.

Glass remained probably the most commonly used material. By mixing metal oxides, the subsequent glass could be turned into exquisite glass sculptures. The Chinese cut and polished it like semi-precious stones, to imitate other materials, especially jade, amber or agate.

Overlay glass bottles were formed by dipping a glass bottle in molten glass of a contrasting colour and then carving down through the thin outside layer to the base material beneath. Magnificent designs, even in multiple colours, were created this way, which produced like a cameo effect. Most frequently, these "overlay" bottles were red, green or blue.

From the nineteenth century, small snuff bottles were painted from the inside out through a long and meticulous technique.

The artisan painted on his back, held the bottle facing the light and worked with a tapered brush, with only a few hairs, that went in and had a right angle so that the paint could go onto the surface. The bottles were first painted with iron oxide mixed with water. This created a necessary base suitable to take the paints, which was applied as a sub-layer, starting at the bottom of the bottle and then up to the neck. The paints were applied subsequently. The details had to be painted before the main figure, with the eyes first, then the face, then the background, etc. Most of the patterns are of Chinese-style. 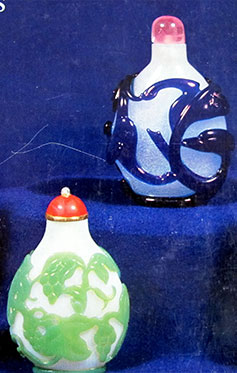 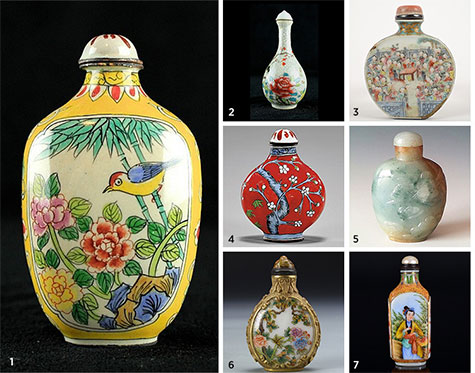 The snuff-bottle market is a niche market, which is still continuing but has experienced a significant slowdown since World War II. There are prestigious collections, sometimes scattered during heritages.

Snuff bottles often have either the maker’s name or the date but rarely both are present. Chinese snuff bottles carrying the mark “Chien Lung” made during the reign of Emperor Tao Kuang (1782-1850) are highly sought after, as well as those of the artists Ding Er Zhong, Zhou Lyuan and Ma Shao Hsuan.