The history of silk started in China about 3000 years BC. Production technique and weaving were one of the best kept secrets. China has maintained its monopoly for centuries.

The millennial history of silk. A coveted Chinese invention

The practice of breeding silkworms, called sericulture, dates back as far as 5000 years before Christ, during the reign of the Yellow Emperor, Huang Di. This mythical sovereign had a role of civilizer. Legend gives credit for introducing silkworm rearing and inventing the loom to the Yellow Emperor’s wife, Lei Zu. Throughout history she is given the title Goddess of Silk.

Ribbons, threads and woven fragments excavated in Zhejiang Province seem to validate this dating.
However, a small ivory cup bearing an inscription mentioning the silkworm, as well as threads, tools and cloth, supposed to be 6000 and 7000 years old were discovered south of the Yangtze River. This might support the thesis of much older origins. 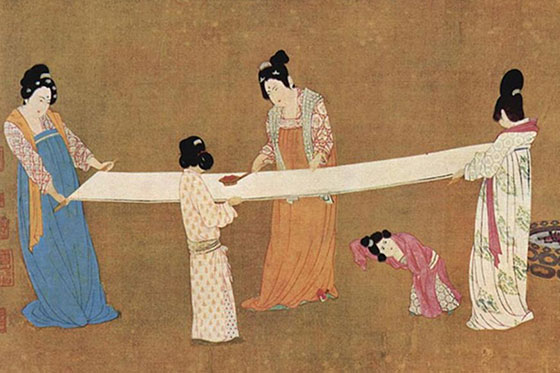 It took centuries of experimentation, for the technique to reach perfection and for the thread to become smooth and round.

The wild silkmoth specie, Bombyx mandarina Moore, which was exclusively eating white mulberries, evolved to the Bombyx mori. It lost the ability to fly and see… and became a breeder of silkworms.

The secret of the technique of worm breeding and weaving were mainly preserved because of their complexity, but also for fear of punishment, by the felon who allegedly leaked secrets or attempted to smuggle worms or cocoons. 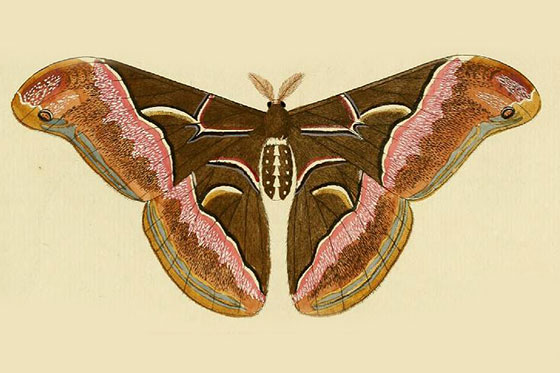 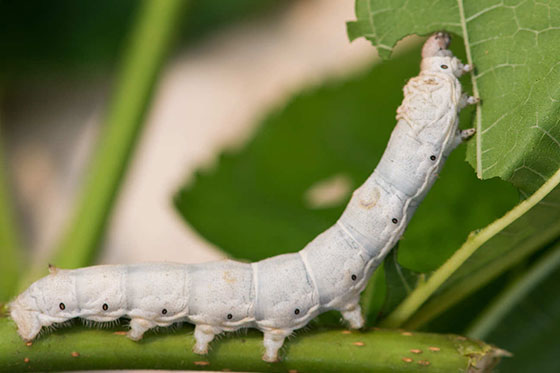 Extracting raw silk starts by cultivating the silkworms on mulberry leaves. The eggs have to be kept at 33 degrees Celsius, and 40 degrees when they are about to hatch. The eggs hatch and the caterpillars (silkworms) are fed with fresh mulberry leaves every half hour, day and night. The silkworms are placed on trays, put on each other and kept in a warm and stable environment. After 25 days, the worms secrete a gummy substance within 3 or 4 days which solidifies on contact with the air, resulting in the fibre of the cocoon. The cocoon will be kept in a warm place during eight or nine days. 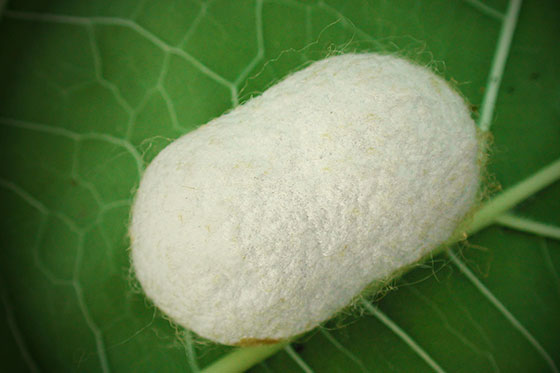 Once the pupae are formed, they are steamed, and the worms are killed. The pupae are dissolved in boiling water in order for individual long fibres to be extracted and fed into the spinning reel.

When unwound, a single cocoon produces a silk filament, which can reach 600 to 1000 meters, once coiled on a spool. Since a single thread is too fine and fragile for commercial use, anywhere from five to eight strands are spun together to form a single thread of silk, which will later on be dyed and woven.

In each producing province, raising worms, rolling silk and spinning threads were the ordinary work of women. Weaving and embroidery work were performed at home or in large workshops. 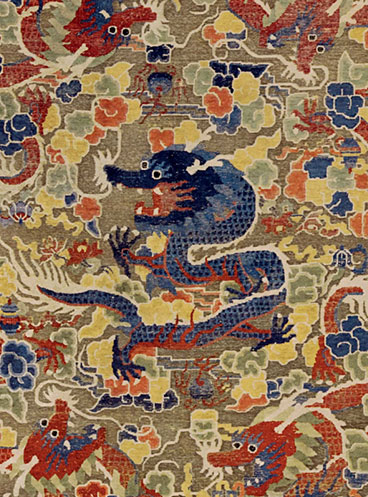 The use of silk

Silks were originally reserved for the Emperors of China for their own use, for their close family as well as for high dignitaries. Usage and colours were very codified. The emperor wore long dresses in white silk in his palace, while yellow, the color of the earth, was worn by members of the imperial family.

With time, its usage spread gradually through Chinese culture and democratized. It was also used to make ropes and luxurious paper. Under the Han-Dynasty, and through the Tang-Dynasty, silk was even used as a bargaining chip, used to pay taxes and civil servants. Prices were calculated on its alder.

The silk was routed to Europe. The caravans opened the mythical silk road, born from agreements with the Central Asian tribes. This allowed the development of exchanges and the trade of precious stones, such as gold, jade and silver, with the Romans and Hindus in particular.

The network of commercial routes connected the city of Chang’an (now called Xi'an) to the city of Antioch, in medieval Syria (Turkey today). It passed through China, Central Asia, Northern India, the Parthian (nomadic eastern Iranian) and Roman empires and connected the Yellow River Valley to the Mediterranean Sea.

In addition to the merchants’ trading activities along the Silk Road, the transmission of ideas and culture, notably in the area of religions. Buddhism spread from India to China, as well as Islam along trans-Siberian routes.

Around 760, trade started declining, in favor of maritime routes, which were more secure. 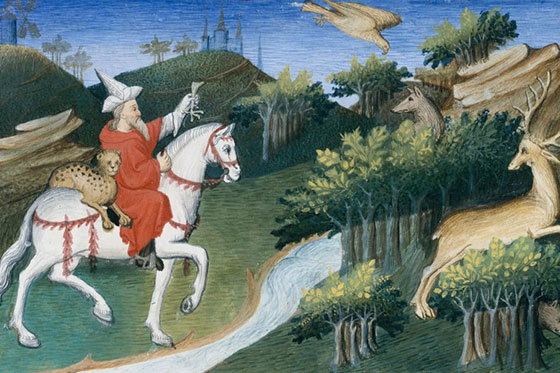 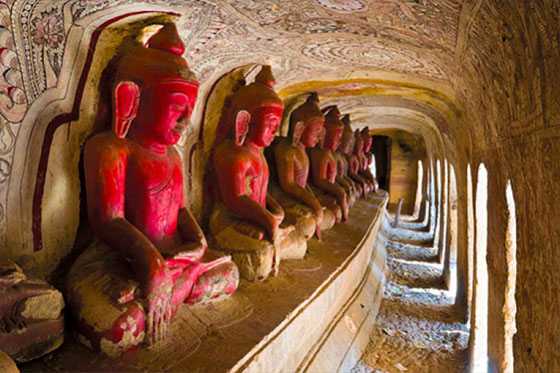 The archaeologist Aurel Stein made his greatest discovery at the "Caves of the Thousand Buddhas", in 1907. It was there that he discovered silk paintings and banners, all in all 20,000 documents, which he took away, in order to preserve them from burglars. These treasures belong to the British Museum, the British Library, the Library of Indian Affairs and the National Museum of New Delhi.

Legends tell that during the Battle of Carrhae in 53 BC, the soldiers of the legions of Marcus Licinius Crassus, were so frightened by the colorful silk banners of the Parthians that they fled. According to other sayings, the Romans were ready to do anything to obtain a silk toga. In order to avoid overflowing, the Roman law prohibited its use by men.

The secret is stale

Despite the popularity of silk, the secret of silk-making reached Korea with technological aid from China, India by AD 440, and only reached Europe around AD 550, via the Byzantine Empire. Immigrants, monks or merchants were smuggling silkworm eggs and cocoons and revealed the secret, to make profit from it.

The Byzantine silk industry was born, trying to compete with China. Although being of good quality, it struggled to compete and Chinese silk was still the favourite among buyers in the Middle East and Europe.

The Persians began to master silk-art and developed their own techniques only in the sixth century. During the Crusades, in the thirteenth century, Italy started producing silk, when it brought back skilled weavers from Constantinople. 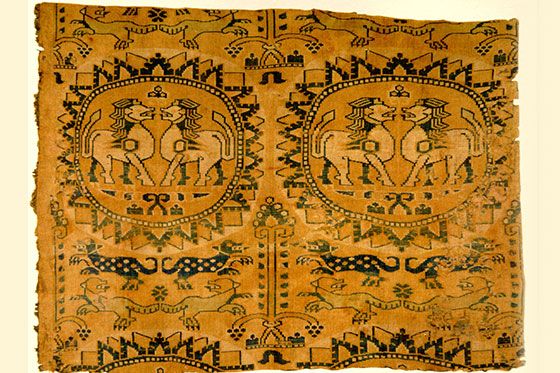 China became again the world's largest silk producer in the late 1970s, and although competing with synthetic fibers, production has doubled over the last 30 years.

Today, China and Japan are the two main silk producers, with more than half of the world's annual production. 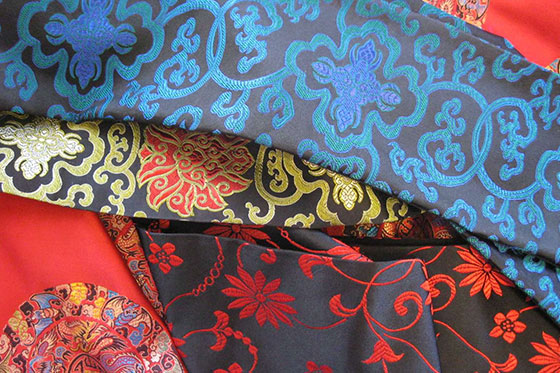 Discover our history and our philosophy