The Ming Dynasty was renowned for its artistic, architectural and cultural contributions, as well as for its elegant and excellent furniture, which was enjoying a real golden age. 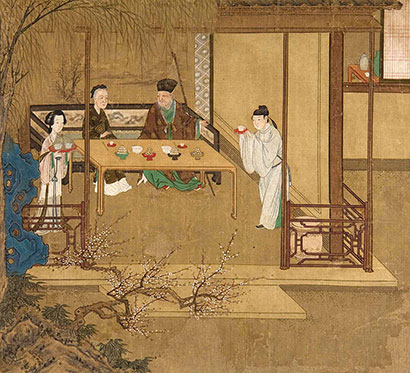 The Golden Era of Chinese Furniture

The Ming Dynasty is considered, in hindsight, the golden era in the development of the style of ancient Chinese furniture.

Seats, tables, screens, cabinets, consoles, chests of drawers, cupboards and bookcases seduced the literati and the imperial court, by their sobriety and the elegance of their lines, with soft curves.
The development of the ingenious and complex mortise and tenon joinery, which required no nails, screws or other metal joining devices, underlined harmonious and timeless lines.

Ming Dynasty period furniture was not fancifully designed for the sake of design itself, meaning that design was not divorced from function. The furniture was sometimes carved with simple, elegant, often geometric friezes and always beautifully proportioned.

Most furniture was made of huali (rosewood), which was the most exquisitely crafted wood. It was polished and sometimes varniched so as to magnify its veining.

Some examples of simple and timeless furniture often built by anonymous crafters. 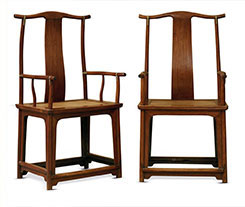 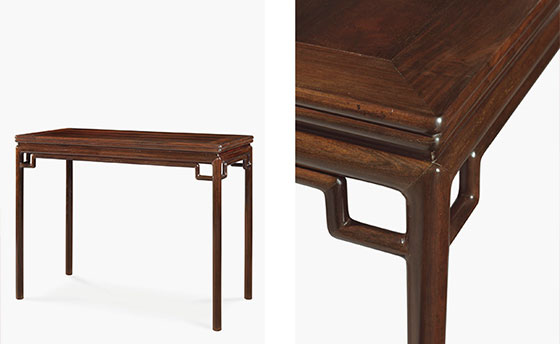 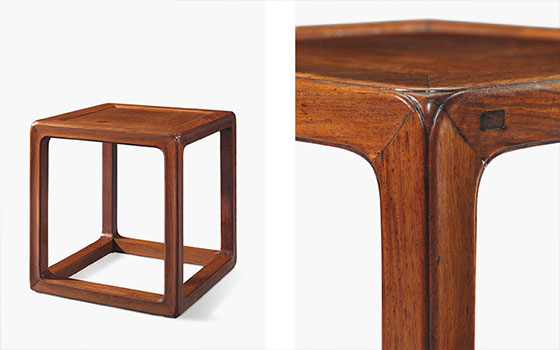 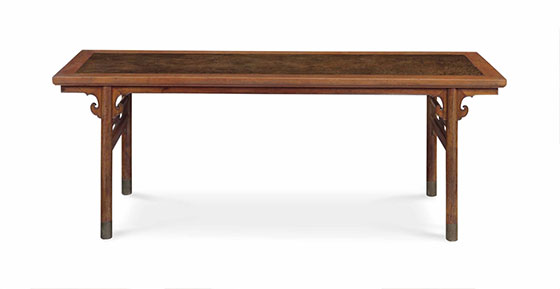 In 1368, the Han, headed by a peasant monk, called Zhu, joined one of the many insurgent forces that had risen in rebellion against the mongols-led Yuan dynasty. They conquered Nanking, Canton and then Peking, drove the Mongols to the north, and founded the Ming dynasty.

After the reign of Emperor Shenzong (1573-1620), the dynasty began to decline, the pressure of the Europeans was increasing, the last years were riddled with corruption and conspiracies of officials’ eunuchs. The danger came from the North at the end of the 16th century with the Manchu offensive, which saw Beijings’ fall in 1644.

Since at least the Ming dynasty, the standard rubric for discussing the religions of China was the "three teachings," referring to Confucianism, Daoism, and Buddhism. The various forms of Chinese traditional folk beliefs and popular practices issuing from the three teachings evolved into something like syncretism. The most commonly accepted opinion among the Confucians’ elite is that these three laws or cults coalesce into one creed and that all of them can and should be believed.

However, there were tensions between the different streams. Sometimes, the imperial power, supported by the Confucian scholars, sought to regulate the number of monks. Nevertheless, Buddhism kept a power of attraction which had never been denied among the population. 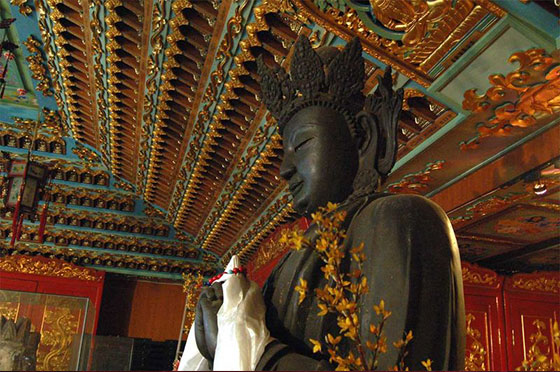 Cultural Heritage under the Ming

China's regional and global influence culminated with Emperor Ming Chengzu, known in history as Yongle, who passed on to posterity for his architectural and cultural achievements.

Three personalities, an encyclopaedia, famous novels, testify to the incredible literary effervescence during this period, which legitimizes its reputation, and allows it to compete in notoriety, with the Han and Tang dynasties. 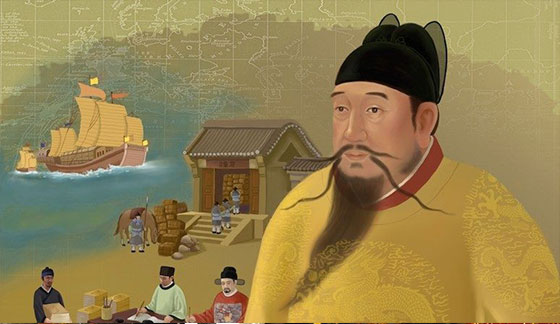 Zheng He was a Chinese fleet admiral, commissioned by the Yongle Emperor to explore the Pacific and the Indian Ocean. During twenty-eight years, he commanded seven expeditionary voyages that lead him to East Africa, the Red Sea and maybe America, several decades before Christopher Columbus.

His expeditions have contributed to the cultural and commercial influence of China.

was an eminent Chinese herbalist, naturalist, acupuncturist and doctor. His major contribution to clinical medicine was his book "Compendium of Medical Matters", the most documented book of traditional Chinese medicine, which still has scientific and medical significance today. 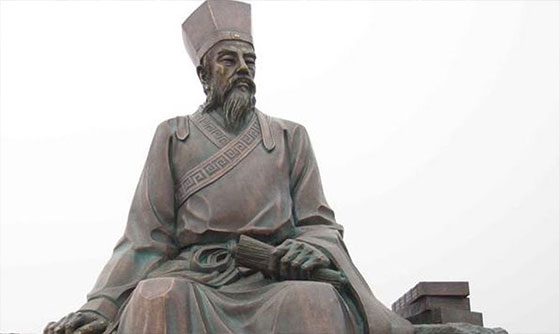 During the reign of Emperor Jiajing, this high official and neo-Confucian philosopher was the leading figure in the "School of Mind". According to him, knowledge and action were unified as one

Nonetheless, Neo-Confucian writings adapted Buddhist thoughts and beliefs to the Confucian interest. The whole history of the ideals of the sixteenth and seventeenth century, will be in one way or another referring to Yangming.

The writing of this work, a compilation of all knowledge since antiquity and the first of its kind, required two thousand scholars who spent four years compiling the encyclopaedia under the leadership of the Emperor.

The scholars incorporated circa 8,000 texts from ancient times through the early Ming dynasty. Many subjects were covered, including agriculture, art, astronomy, geology, history, medicine, natural sciences, religion and technology, as well as descriptions of unusual natural events.

The encyclopaedia was completed in 1408 at the Nanjing University. It comprised 11,095 volumes and used about fifty million Chinese characters.

Fewer than 400 volumes have survived today or 3.5 percent of the original work. 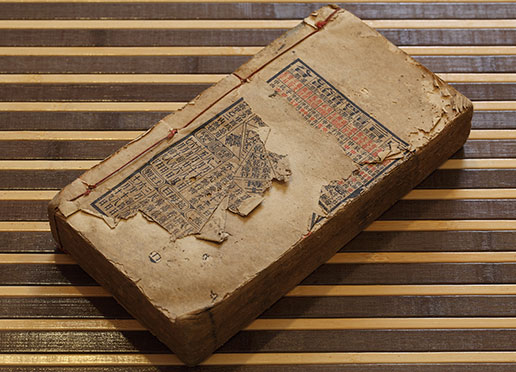 The novels of the Ming dynasty represented a pinnacle of classical Chinese fiction. The highlights include three novels: "Romance of the Three Kingdoms", "Water Margin" and "Journey to the West". Today, they are still among the most appreciated of Chinese literature. 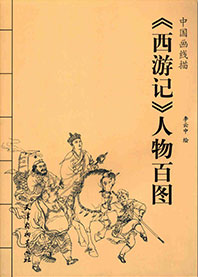 Art flourished during the Ming dynasty, with new innovations in ceramics art as well as in building monuments and palaces. An equally distinguished Ming art - garden design - was renowned for the beauty of its gardens and was a stupendous addition to the cultural legacy of the period that they influenced all subsequent garden design.

Garden building saw its heyday in the Ming Dynasty and were very popular among scholars. Chinese gardens belonged to national pride, were maintained for centuries and often overhauled during the Qing Dynasty. Some are listed as world heritage sites by the UNESCO.

As a masterpiece of development, a typical Chinese garden includes one or more small streams, connected to each other, which flow under enchanting bridges, thanks to the ingenious use of ponds. The garden contains numerous pavilions, rock works, centuries-old trees, thus creating a serene and harmonious atmosphere.

The city of Suzhou in Jiangsu Province is famous for its gardens. The most famous existing one from the Ming dynasty is “the Humble Administrator's Garden” in Suzhou. 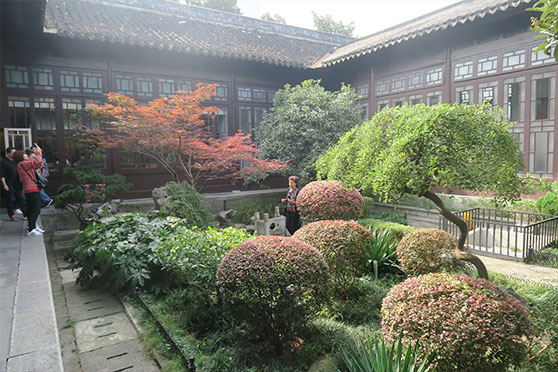 Under the Ming, trade relations with the West started developing. The imperial porcelain factory was established at Jingdezhen and started exporting porcelain around the world on an unprecedented scale. Chinese potters adapted remarkably well to the requirements and tastes of buyers around the world. From the late 17th century, they produced complete table services which were shipped, particularly to Europe.

Kiln technology has always been a key factor in the development of Chinese pottery. One of these innovative techniques was the “orange peel” porcelain. This kind of "tsong-yen"-cover came from a withdrawal, made during liquefaction, which, instead of producing a crackle, resulted in irregularly sown droplets. 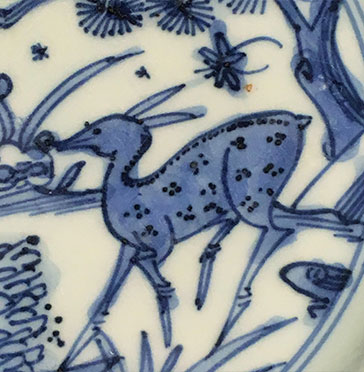 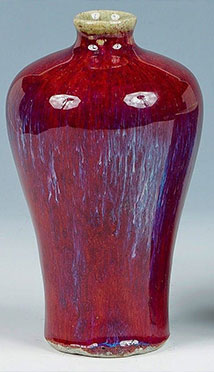 The copper red monochrome porcelain described a particular type of deep, rich glossy red glaze, with bluish flows under a more or less translucent cover. It was created by applying copper oxide as a pigment to the entire exterior body of the porcelain. Although this colour was first achieved during the Ming dynasty, it was under Emperor Kangxi (1662 - 1722) that the colouring technique “sang-de-boeuf”, translated as “ox-blood”, knew a spectacular production.

The city of Pingyao, an ancient fortified settlement in central Shanxi, is famed for its well-preserved Ming urban planning and architecture. It is a UNESCO World Heritage Site since 1995.

Most of today’s Great Wall was built or restored in Ming-Dynasty. Thus, the part, located North and Northwest of Beijing (the most widely visited area), also witnesses this Dynasty.

It was also under the Ming that, in 1420, were built the Temple of Heaven, followed by the first Imperial Palace, with its southern door. The palace was destroyed and rebuilt identically, and expanded in the same style, by the first emperor of the Qing Dynasty, to become the Forbidden City, as we know it today. 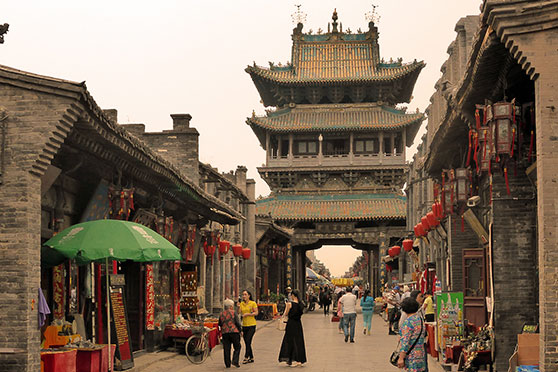