The ephemeral dynasty of the Sui, then that of the Tang, brought, at the price of decisive reforms, a period of prosperity and unparalleled artistic and cultural influence.

The Sui Dynasty, founded by Emperor Wen, a former high official of the Bei (Northern) Zhou dynasty, unified China after a period of four centuries of upheaval and disunity during which North and South China had lived under separate dynasties. He also instituted widespread legal, political, and administrative improvements.

Sober and pragmatic, he initiated the construction of the Grand Canal, to allow trade between north and south, protected borders by restoring and enlarging the Great Wall, reformed the system of distribution of agricultural land, and supported the spread of Buddhism. 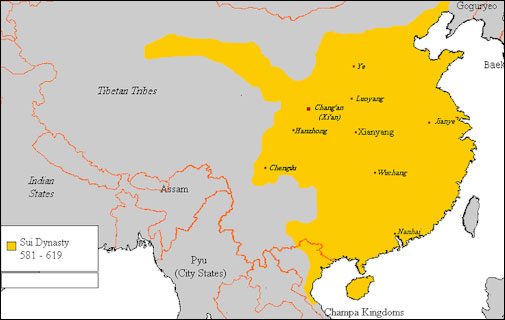 The Sui Dynasty paved the way for a long and prosperous Dynasty. Once the stability had been established by the Sui, the territory of the Tang Empire expanded towards Central Asia and prospered. The increased security on the Silk Road opened up an exceptional period by its creativity, the diversity of new and perfect forms.

The capital city, Chang’an, became the greatest city in the medieval world; its streets were filled with travelers, artists, merchants and monks. Persians, Arabs, Indians and Turks rub shoulders there, and introduced new ways of thoughts and foreign religions (including Nestorianism, Mazdeism, Manichaeism, Islam) flourished, as well as fashions and new decorative elements. This confident cosmopolitanism is reflected in all the arts of this period.

During the reign of Emperor Tang Taizong (circa 600 - 649), the Tang Dynasty reached its height, before a great persecution against Buddhism put an end to the various artistic expressions that flowed from it. Monasteries, statues, objects of worship were then destroyed. Monks and officiants returned to civilian life. 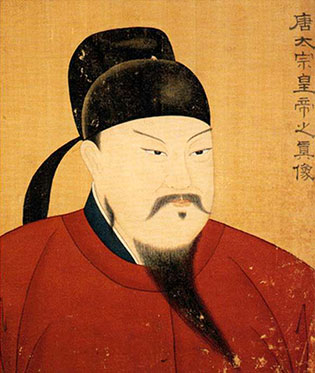 The Sui and Tang Dynasties. Arts

The empire prospered under stable rule for a while and there was a period of relative peace and prosperity afterwards. Along with the increase of calm, art and literature flourished. Stimulated by foreign influences, artists developed a new sculptural style, while painters acquired the knowledge of perspective drawing.

Pottery and ceramics were reaching new heights of sophistication that augured the development of China's porcelain industry. It was the golden age for art, a remarkable and incredibly rich artistic period. 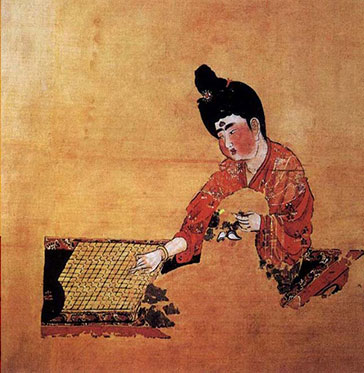 Under the Tang-Dynasty, secular painting dominated the pictorial arts and "horse-paintings" started, as well as a new technique of representation of the landscape.

The art of painting also started being conceptualized (Wang Wei's Treaty on Painting).

Horse was the most important means of transport in the Tang Dynasty, and it was also one of the most important in the court’s life. The aristocratic elite devoted a real cult to the horse and had high quality horses. The horse was no longer just a trained rider for the battle, but a luxury animal, imported from the distant regions of Ferghana and Khotan to the capital city. At that time, imperial stables numbered then forty thousand horses.

Horses also had become a popular subject for painting, and one of the emperor’s favourite court artists were the horse painters Chen Hong and Han Gan in particular. They were asked to portray the favorite horses of the sovereign. Thus, the painting which witnessed the hobbies of the emperor - polo, hunting, dressage - depicted indirectly, that horses had become a sign of power and wealth. 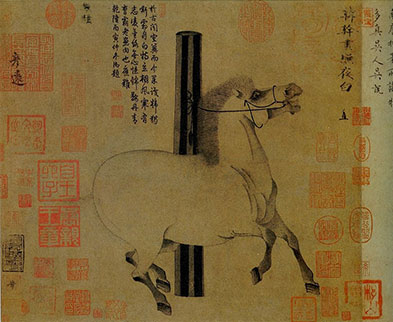 Developed in China during the prosperous era of Tang Dynasty art, ink and wash painting was invented by Wang Wei, who was the first artist to apply colour to existing forms of painting using varying shades of ink washes.

Wang Wei was a Tang dynasty Chinese painter, poet and musician. He invented this technique and developed his interest in perspective drawing, thus conceptualizing, in a treaty, the principle according to which "the idea precedes the brush". 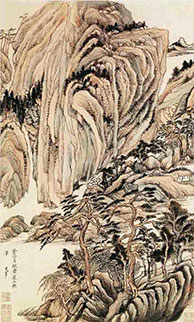 Influenced by the Middle East, decorative art enjoyed a prosperous period. Craftsmen were appreciated and recognized by the elite and competed in the metal art or ceramics. However, it was in the making of functional ceramics for daily use and export that Tang potters achieved their greatest technical innovations and artistic refinements.

During the Sui and Tang dynasties, a wide range of ceramics were produced and exported, sometimes as far as to Egypt.

The gradual development towards fine, smooth porcelain continued into the Tang dynasty in southern China when white clay and feldspar were mixed together. This fine local clay is fired to a very high temperature to produce protoporcelain.

Tang porcelain, characterized by its translucent white clay body was the thinnest yet hardest ceramic ever developed. The smooth, white surface made it feel like jade and it emitted a musical sound impact. Its most common forms were vases or teapots, which show how tea drinking became popular/important. 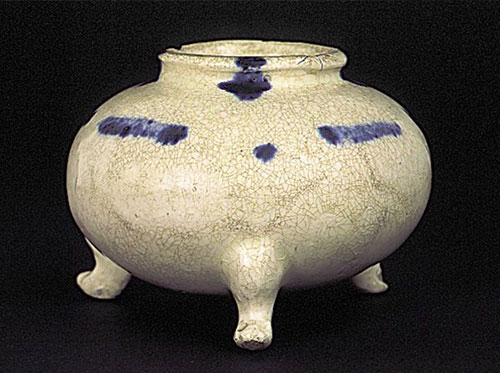 The beginning of the Tang Dynasty was one of the few periods during which metalworkers developed high-quality goldsmiths in the Chang'an and Luoyang areas where the imperial workshops were probably located.

The traditional art of decorated bronze mirrors also took up these motifs, which were either carved, engraved or encrusted (silver, gold, lacquer). 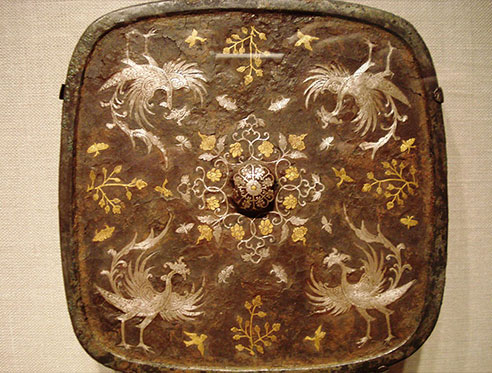 Imperial tombs and those of high lineages provided important information about the knowledge of the Tang civilization, in particular about its social system, religious beliefs, political organization and artistic tastes.

The Tang Dynasty took over most of the Han's imperial tomb tradition, with some adjustments.

As under the Han, Tang dynasty tomb figures were pottery figures of people and animals made as grave goods to be placed in tombs.

Under the Tang-Dynasty, the largest protective figures were often arranged in groups or in pairs. 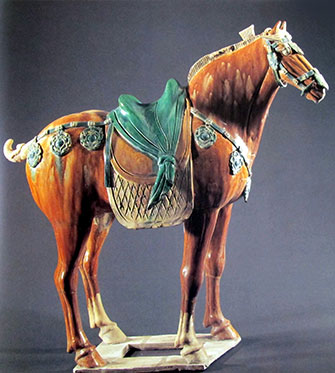 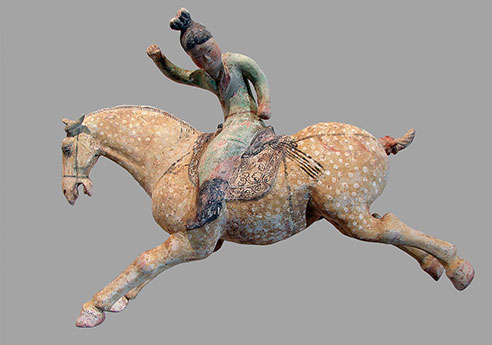 Mingqi were funerary furniture or pottery objects placed in Chinese tombs to provide the deceased with the same material environment enjoyed while living, thus assuring immortality. Contemporary pottery, and particularly the terracotta figures which referred to human activities provided us with a vivid insight into Tang society: the animals, the buildings, the horses, of which the Tang were so fond, the buildings, the dancing-girls with long sleeves, musicians, ladies of the court with sophisticated hairstyles and costumes, and all kind of daily utensils.

In Han China, mingqi were already in vogue; under the Tang, they were ordered in state factories as several hundreds or even thousands of them could be deposited in a single grave.

Tang mingqi were frequently made in clay but were ornamented with sancai (three-color) glaze, an artistic invention of that time. Made of sancai ceramics, mingqi took on a more mortuary aspect. 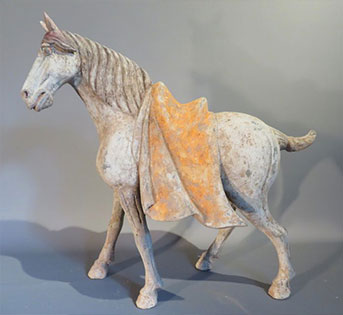 During the Tang dynasty, earthenware figures were very popular and a great variety of them were made, most of them were small-sized and monochrome. This sectional molding technique – bodies and heads were made separately and assembled afterwards - allowed for hollow, thin-walled clay figures that would dry quickly and not explode in the firing process. It also ensured that sculptures could be produced relatively quicky, and in sufficient quantity to meet commercial demand.

Some more important figures such as men statuettes, camel drivers, grooms, civil servants, warriors and guards protected the grave from evil spirits. The figures were ready for glazing. Tang tomb sculptures often have multicoloured glazes—referred to as «sancai », or “three-color” glaze. The vivid caramel, straw, and olive-green colours illustrated this technique.

Potters brought a particular care to copy the attitudes of the horses which were very popular under the Tang. Racy, impetuous, Horses were presented being harnessed, running freely, mounted by warriors, falconers, dancing-girls, musicians or polo players. They were built and shaped by thousands. 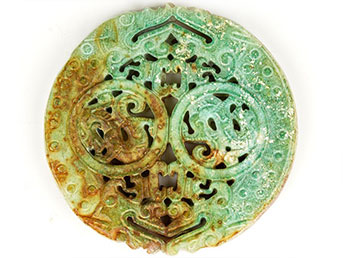 During Chinese history, Jade was also used for tomb objects carved to honour ancestors, exorcise evil. Many ritualistic objects, such as the bi were still popular under the Tang. They were most often engraved with mythological animal shapes which included the dragon and phoenix.

Epitaphs relating the life of the deceased, including status and career, were engraved on jade tablets.

The Tang capital, Chang’an, became an important Buddhist centre, and from there, the religion spread to Korea and Japan.

Under the Tang, Buddhist art developed remarkably and spectacularly, including stone art along the Silk Road until the great proscription of 845.

After a transition period under the Sui, Buddhist sculpture evolved towards a more realistic expression. In particular under Indian foreign influences, sculptures evolved towards a more classical form. The gilded bronze statuettes - deities with a softly rounded face, imbued with sweetness and serenity - were represented in sensual poses. These features witnessed to the Indian contributions of the Gupta period. 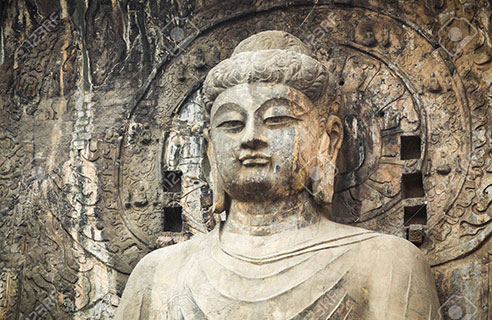 Emperor Wen of Sui (581-604) was a Buddhist who encouraged the spread of Buddhism through the state. He ordered the building of monasteries in all provinces, as well as the realization of gilt bronze sculptures and sculptures in sandalwood or stone.

Emperor Wuzong of the Tang Dynasty is said to have hated the sight of Buddhist monks and in 845 AD banned all foreign religions, including Buddhism, to promote Taoism. He confiscated Buddhist possessions and ordered the destruction of temples. From the medieval period, only two temples survived, Nanchansi and Foguangsi, both in the Shanxi region. 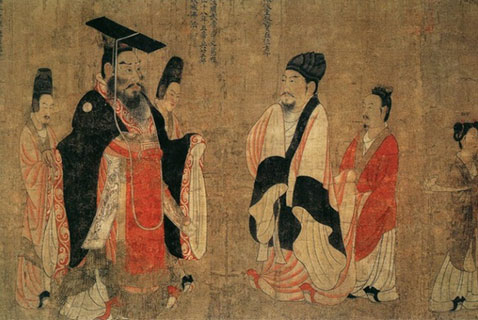 Discover our decorative items and our gift ideas