Northern China is appreciated for the legendary quality of its furniture, its historical heritage, its authenticity, its grandiose landscapes and its welcoming inhabitants.

The Northern provinces, with a harsh climate, drylands, and even deserts are renowned for the quality of their furniture. The furniture has clever and unique techniques that allow certain components to be assembled or disassembled, or to be used separately.

Under the Ming-Dynasty (1338-1644), the Shanxi Province was already renowned for its quality cabinetmakers, suppliers of the imperial courts. The province is one of our privileged sources.

Examples of typical furniture from the Northern Provinces 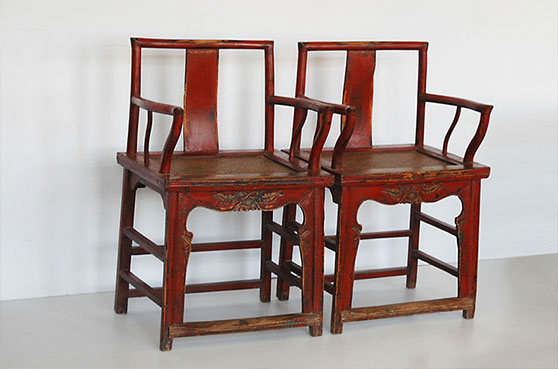 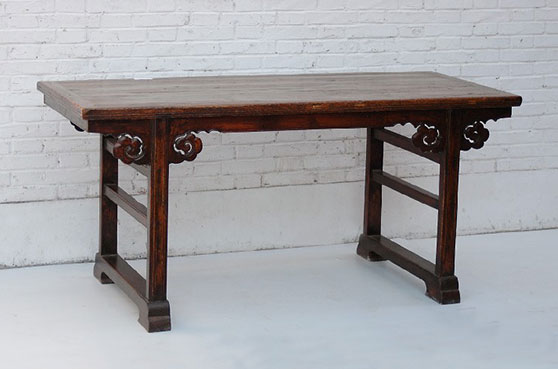 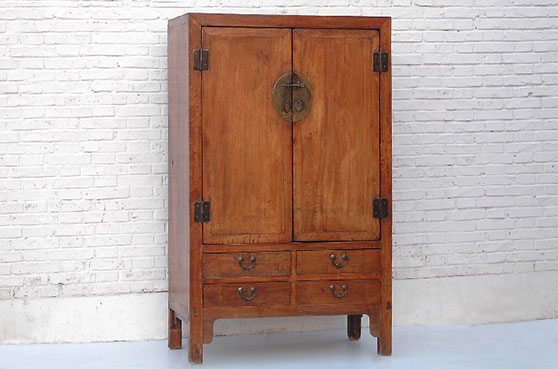 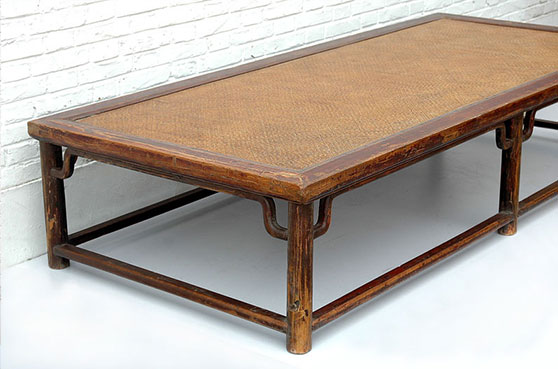 The name Shanxi means "West of the Mountains", a reference to the province's location west of the Taihang Mountains. Shanxi's long history is traced back to the days when it was a major cradle of Chinese nation. Its capital is Taiyuan City.

The province occupies an area of 156,000 square kilometres, stretching from central China to its northernmost part. It has a very complex and diversified relief. Shanxi is bounded by the province of the Inner Mongolia to the north, and should not be confused with the Shaanxi province to the west, which is its namesake to a letter. 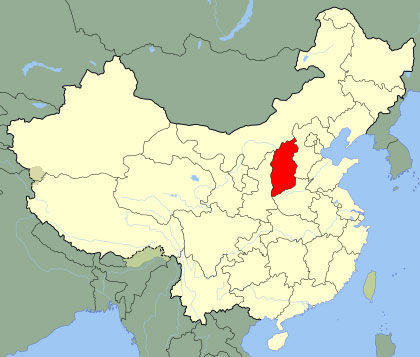 The powerful state of “Jin”, was located in what is now Shanxi Province, and has experienced troubled times. First ruled by the Han, at the fall of the Tang, it went through political upheavals. Five dynasties quickly succeeded one another between 907 and 979.

The Han Dynasty ruled Shanxi as the province of Bingzhou. During the Tang Dynasty and after, present day Shanxi was called Hédōng.

Shanxi only gained its present name and approximate borders during the Ming Dynasty (1368–1644). During the Qing Dynasty, Shanxi extended north beyond the Great Wall to include parts of Inner Mongolia.

Following the defeat of the Second Sino-Japanese War, Japan occupied much of the province. 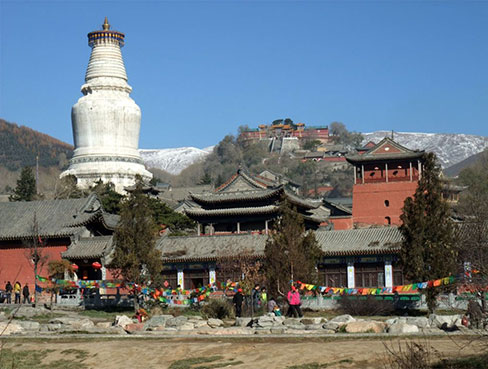 Shanxi is located on a plateau made up of higher ground to the east and the west, of which 70 % of the area are bounded by mountain ranges. The highest peak is Mount Wutai with an altitude of 3,058 m.

In the centre of the province, there are a series of valleys through which the Fen River runs. The Great Wall of China forms most of the northern border with Inner Mongolia, while the Huang He or Yellow River forms the western border with Shaanxi province.
Xiechi Lake is the largest natural lake, located nearby Yuncheng in South-Western Shanxi. It is a saline lake.

For centuries, Shanxi was a place of trade and banking transactions. The well-preserved town of Pingyao retains the remains of this past glory.

Nowadays, Shanxi possesses bauxite and coal deposits - with an annual extraction exceeding 300 billion metric tonnes. Industry in Shanxi is mainly centred around heavy industries such as chemical and electrical production.

The climate drought and dwindling water resources limit agriculture in Shanxi. Important crops in Shanxi include wheat, corn, millet, legumes, and potatoes. Cotton, tobacco and vines are also grown there. 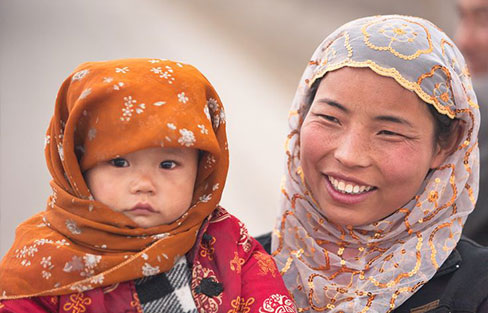 The population is mostly Han Chinese with minorities of Mongol, Manchu, and the Hui. The dialects spoken in Shanxi are called Jin, based on their preservation of the Middle Chinese “entering tone” (stop-final) category, even though this is rather characteristic for Southern Chinese dialects. 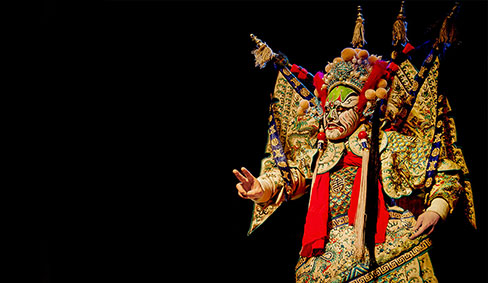 The population is mostly Han Chinese with minorities of Mongol, Manchu, and the Hui. The dialects spoken in Shanxi are called Jin, based on their preservation of the Middle Chinese “entering tone” (stop-final) category, even though this is rather characteristic for Southern Chinese dialects.
Shanxi cuisine is most well-known for its extensive use of vinegar as a condiment, as well as for a huge variety of noodle dishes.

Zhonglu Bangzi, is a type of popular opera, a group of operas generally distinguished by their use of wooden clappers for rhythm and by a more energetic singing style.

In the 19th century, “Shanxi merchants” constituted a historical phenomenon that lasted for centuries. They were conducting trade across both sides of the Great Wall and developed a new system: the creation of small structures, which were essentially banks that provided services like money transfers and transactions, deposits and loans.

Gansu is a long and narrow-shaped province, with a long corridor, located in the northwest of China. It lies between Qinghai, Inner Mongolia and the Tibetan foothills, following more or less the path of the Silk Road. It is an often inhospitable region largely influenced by Mongolia and Tibet in particular.

Gansu has a population of 26 million. The capital is Lanzhou. 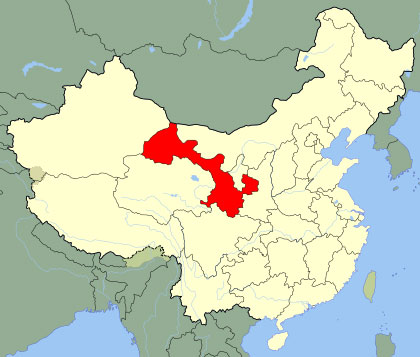 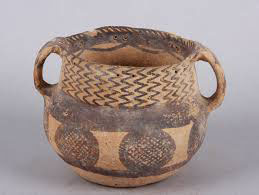 The Dadiwan culture, from where archaeologically significant artifacts have been excavated, flourished in the eastern end of Gansu from about 6000 BC to about 3000 BC.

From the state of Q'in, only vestiges remain - inside and beyond. Qin tombs and artifacts have been excavated from Fangmatan, including one 2200-year-old map. 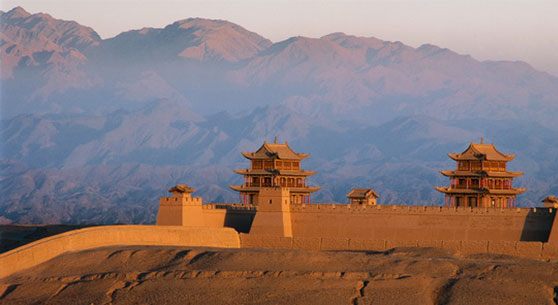 In imperial times, Gansu was an important strategic outpost and communications link for the Chinese empire.

The Han dynasty extended the Great Wall, building the strategic “Yumenguan” Jade Gate Pass, and Yangguan fort towns along it.

The Ming dynasty decided to build the Jiayunguan outpost in Gansu.

Along the Silk Road, Gansu was an economically important province, as well as a cultural transmission path. In addition to the economic impact, the ideas and beliefs conveyed by the caravans had a considerable influence on Chinese thinking.

The inhabitants of this rugged and mountainous region have suffered from natural disasters, in particular from earthquakes which have marked the collective memory. An earthquake in Gansu killed around 180,000 people mostly in the present-day area of Haiyuan in 1920, and another killed 70,000, 12 years later, in 1932.

As a result of droughts and famines between 1958 and 1961, the population was decimated and the economic growth of Gansu was significantly hampered. 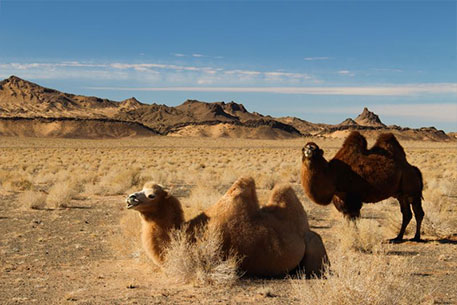 The province is bounded from north by vast expanses of desert - the Gobi Desert – which are scattered by large, fertile oasis around Dhunang. The vast majority of its land is highlands which are more than 1,000 metres above sea level. The landscape in Gansu is very mountainous in the south, the highest southern point being at 5,547 metres. The climate has very cold winters, with warm summers. With a crucial lack of water, this province of lunar and sublime landscapes, located on the borders of China, is a difficult region to cultivate and live.

The Huang He River passes through the southern part of the province, as well as the Yellow River, which is the main water source of Gansu. Some groundwaters still allow the cultivation of grapes crops.

The southern part of the province contains the geographical centre of China, marked by the Centre of the Country Monument at 35,33° North latitude, and 103,23° longitude. 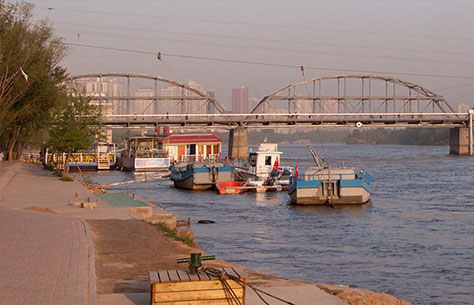 Most of Gansu's economy is based on the extraction of mineral resources. However, pollution from heavy metals, such as uranium in irrigation water, are a threat to environment. Industries other than mining include a huge hydropower potential, which ranks ninth in China.

The manufacture of building materials and machinery, but also some extensive crops include cotton, maize, millet and wheat. Gansu is also known as a source for harvesting and packaging of wild medicinal herbs - such as the hairy asiabell, fritillary bulb, and caterpillar fungus – which allow for some diversification.

Gansu is mainly Han and also has Hui, Tibetan, Dongxiang, Tu, Manchue, Yugur, Bonan, Mongolian, Salar, and Kazakh minorities. Most of the inhabitants speak dialects of Northern Mandarin Chinese. On the border areas of Gansu one might encounter Tibetan, Mongolian, and the Kazakh language. Most of the minorities also speak Chinese. 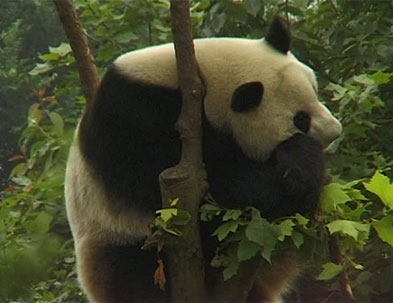 Gansu’s large spaces, mountains, steppes, sand dunes, lakes, shelter a rich fauna of at least 600 species of wild animals - the giant panda, golden monkeys, antelopes, snow leopards, sika deer, musk deer, Bactrian camel, and birds - of which most are under a state protection. Gansu is home to many species and subspecies which occur nowhere else in the world and give the province great value to naturalists and conservationists.

Even though Shandong is situated south of Beijing, it is a coastal province in what has traditionally been considered northern China. Shandong borders the Yellow Sea to the east and the Bohai Sea to the north.

Open to the sea, the peninsula suffered from the Western and Japanese invasion.

Shandong is one of the most populous provinces of China, with a population of more than 95,000,000. The city of Ji’nan is the seat of the provincial capital. 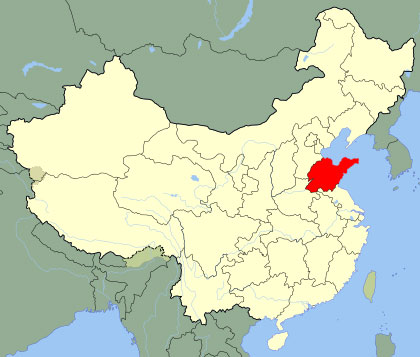 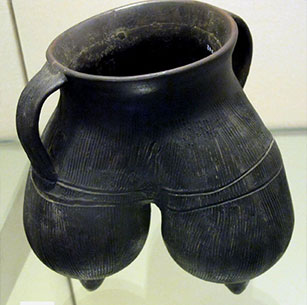 The long and eventful history of Shandong’s Province

Shandongs’ history - as witnessed by black pottery fragments of the Longshan culture – is about 5,000 years old.

The Qi State was a relatively powerful state but was crushed and annexed by a yet more powerful state. After the long “Spring and Autumn Period”, the Qin dynasty conquered Qi and founded the first centralized Chinese state in 221 BCE with the King of Qin declaring himself the emperor (Emperor Qin Shi Huang).

After a long period of great instability, divisions and invasions from the North followed, which lasted until the arrival of the Ming. The Ming created peace, and the Qing reunified the region. After the Ming-Qing Transition, Shandong acquired more or less its current borders.

The end of the nineteenth century was particularly traumatic for the region, which was undergoing an unprecedented economic crisis, facing severe droughts followed by large floods, and the arrival of hordes of demobilized soldiers and refugees fleeing the South, to escape Japanese and Korean troops.

Germany used Qingdao as a base from which to extend its commercial influence throughout the peninsula. Similarly, Great Britain took also control over Weihai. This awoke a xenophobic movement, which triggered the Boxer Rebellion. The bloody repression of the Europeans will never be forgiven.

After having been invaded by the Japanese imperial army, the peninsula passed under Japanese rule in 1938. 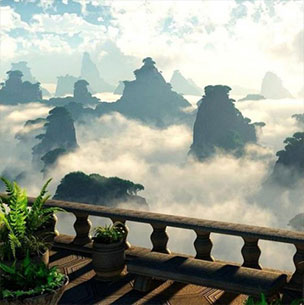 Shandong's coastline is 3,000 kilometres long. Most parts of the province are part of the vast North China Plain. Shandong has a mild climate. The centre of the province is more mountainous, with Mount Tai being the most prominent, with a height of 1,545 metres. The Yellow River passes through Shandong's western areas, while the Grand Canal of China enters Shandong from the northwest and leaves on the southwest.

The Northern part of the province is a poorly developed rural area while the coastline is a real trade gateway.

The most populous cities in Shandong are Jinan, Qingdao, Zibo, Yantai, Weifang, Weihai and Zaozhuang. 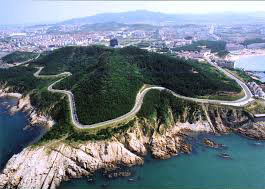 Qingdao - which German influence has made it synonymous of Chinese beer - and the coastal cities of Yantai and Weihai - a booming port town - have supplanted the capital city.

The Shengli Oil Field is one of the major oilfields, which ranks second of China.
Shandong ranks first among the provinces in the production of a variety of products, including cotton and wheat. Other important crops include sorghum and maize.

The province also has revenue from precious metals, such as gold and diamonds mining. 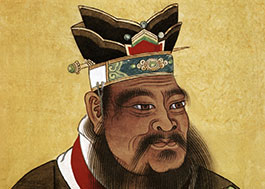 Shandong has also been the home of a large number of historical figures.

The most famous one being Confucius, the great philosopher and social theoretician thinker, as well as Mencius. Furthermore Wang Xizhi, was a great Chinese calligrapher; the Chinese Buddhist monk Faxian, who initiated Indian Buddhism; and Zhuge Liang, a high strategic military.

In 1996, diggers turned the ground of the small town of Qingzhou. They were quickly relayed by archaeologists who discovered a real cemetery of statues or meticulously ordered fragments. These pieces dating from the fourth, fifth and sixth centuries, revealed a great variety of styles as well as an artistry of sculpture.